Episode 11: The Benefits of Being a W2 Crew Member

Angela breaks down the difference between 1099 vs. w2 and most importantly, why people miss out on far too much money and opportunities due to misunderstanding this.

Angela Alea: Welcome back to another episode of Corralling the Chaos. Today I want to dive into a big misconception that so many great event professionals have about how they're classified as either a 1099 or a W2. The reality is most people want to be a 1099 for two obvious reasons.

[00:00:21] Angela Alea: The first one is you get flexibility over your schedule. You get to decide when to work and when not to, and you get the ability to write off expenses. Both of those are fantastic and valid reasons.

However, I think our industry has operated this way for far too long with far too many misconceptions. And most importantly, people are missing out on far too much money and opportunities because of their misunderstanding of this.

[00:00:49] Angela Alea: So before we quantify the financial differences of being a 1099 versus a W2, I want to spend a quick minute understanding why is this even a thing?

So there are two big distinctions in the eyes of the IRS and the Department of Labor when it comes to being a 1099 or a W2. And I want to start with the IRS.

[00:01:13] Angela Alea: The IRS has a stake in you being a W2 because they want their money, the tax revenue (thank you, lovely IRS), but it's harder to track if you're a 1099. So that's one reason why we've all seen the attention on misclassification over the last five to seven years and things like AB5 in California, which more strictly defines those parameters for being able to be classified as a 1099.

[00:01:40] Angela Alea: I hate to tell you, but these things are here to stay and they're going be expanding into the other states–California just started it. It's also a misconception that California is the only state that's placing a priority on this. All of them are! Misclassification is a thing in all 50 states because the reality is the IRS crosses all 50 states.

[00:02:35] Angela Alea: So again, it's all about you, the employee. These things were created to protect you, to make sure you are getting paid the right amount, and are given access to the benefits and accommodations you need. All of these things are to protect you the employee. So out of this initiative through the Department of Labor has come hundreds of these two and three-letter acronyms of rules that businesses have to follow in an effort to protect you, the W2 employee, not you the 1099. As a 1099, you don't get these protections.

Here are a few of the laws in place that are designed to protect W2 employees. The first one is the FLSA. That stands for the Fair Labor Standards Act. These are things that you get protection on to make sure you're getting paid a reasonable wage, you're getting overtime.

Hey, heads up, if you're working five 10-hour days, you don't get any overtime as a 1099. As a W2, you get 10 hours of overtime! So those are some of the things they look for. In addition, child labor laws and my favorite frequency of payroll. I bet a lot of you didn't know that it's actually illegal in most states to pay you more than 12 days after you worked.

[00:04:09] Angela Alea: There's also the Americans with Disabilities Act there's OSHA, there's FMLA, there's EEOC. So that's what I mean by all of these two and three-letter acronyms that are designed to protect you the employee, not you the 1099. So again, another big distinction here. I just want to make sure.

[00:04:29] Angela Alea: If you're a W2, guess what? You still get flexibility over your schedule. You still get to write off things on your taxes, but now you get all of these other benefits. W2-ing a workforce is much more expensive and time-consuming for companies that choose to do that. There is literally zero in it for the company and everything in it for you when they W2 you.

[00:04:50] Angela Alea: The companies pay more in taxes and an exorbitant amount in overhead to process payroll, do tax filings, and workers' comp audits all while trying to be compliant with all of these "rules".

[00:05:30] Angela Alea: But if you become a W2, here are several things that you also get the benefit of. When you become a W2, you now pay half the amount in taxes. This is the biggest misunderstanding! As a W2, you only pay the employee portion of taxes and now the company pays the employer portion. So you're literally going to give yourself a 10% raise by becoming a W2, which we're going to break down in just a minute. We're going to quantify this for you. I think you're going to be shocked with the amount of money that 1099s leave on the table when they choose to 1099.

[00:06:14] Angela Alea: You also save money on workers' compensation because the companies by law have to provide that coverage for you if you're a W2. And no longer do you have to worry about showing certificates of insurance, making sure your worker's comp is up to date. You also get paid faster and without having to generate invoices.

[00:06:34] Angela Alea: So remember companies who W2, every state has different laws about how often they can run payroll. It's illegal to do a Net 30, as I said. In most states, you have to get paid within at least 12 days of when the work was completed. So no more chasing your money.

[00:06:56] Angela Alea: The biggest misconception though, is you can still write off your expenses, although often it's more advantageous to take advantage of the standard [deduction rather than the itemized. So it's up to you, depending on how many expenses you're kind of racking up, as to whether you do the standard or the itemized [deduction].

[00:07:14] Angela Alea: Number six, you get access to benefits like unemployment. I don't know how many of you during COVID couldn't get unemployment. At LASSO, we paid hundreds and hundreds of unemployment claims because we W2 everybody. Also at LASSO, if you're a W2 (not all companies do this, but), you're also able to participate in our 401k with a company match. HINT–that's free money! When we're matching what you contribute towards your retirement, that's free money!

[00:07:34] Angela Alea: Also like I said earlier, if you were to work five 10-hour days as a 1099 there's no OT, right? There's no overtime. As an employee though, you get 10 hours of overtime because it's the law! Obviously, if it's in California, you're going to get it after eight hours in that day.

[00:07:59] Angela Alea: I could keep going on many of the intangibles, but for today, I really just want to highlight the tangible advantages. So let's break down the numbers and quantify why you're leaving money on the table if you're a 1099.

So for this example, let's assume you make $75,000 a year in our industry. If you make more congrats, you're going to save more, which you'll see when you run these numbers. But as a 1099 making $75,000 per year, this is what you are obligated to pay.

[00:08:22] Angela Alea: Okay so I'm going to break down taxes and workers' comp. As an independent contractor, many of you have probably heard the term FICA. That is made up of your Social Security tax and Medicare. 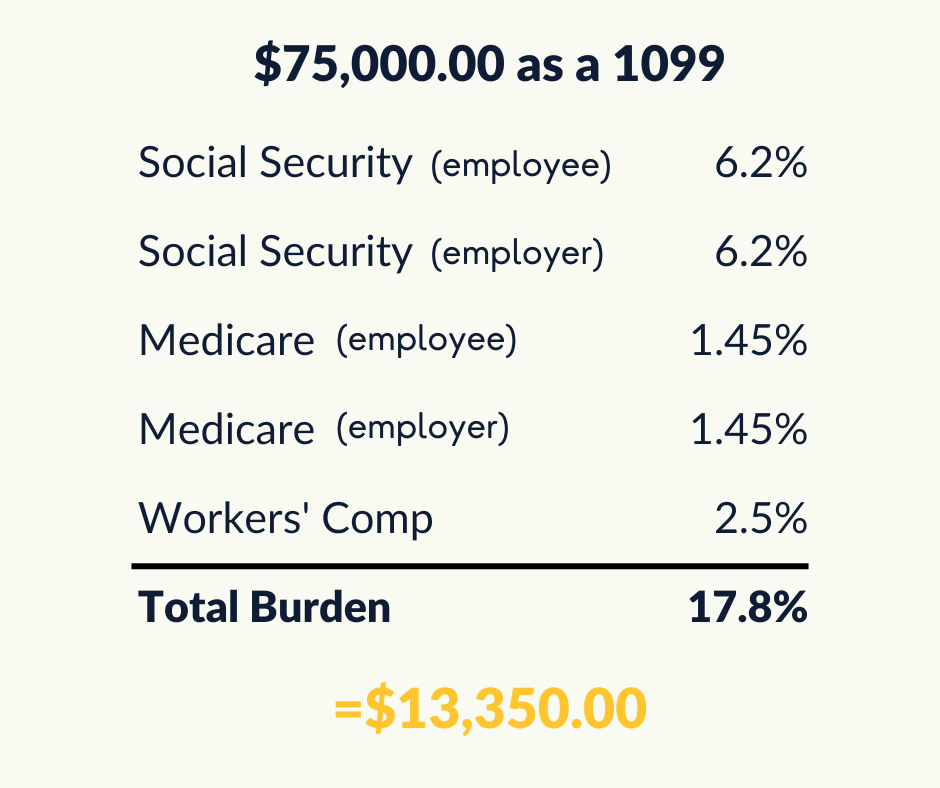 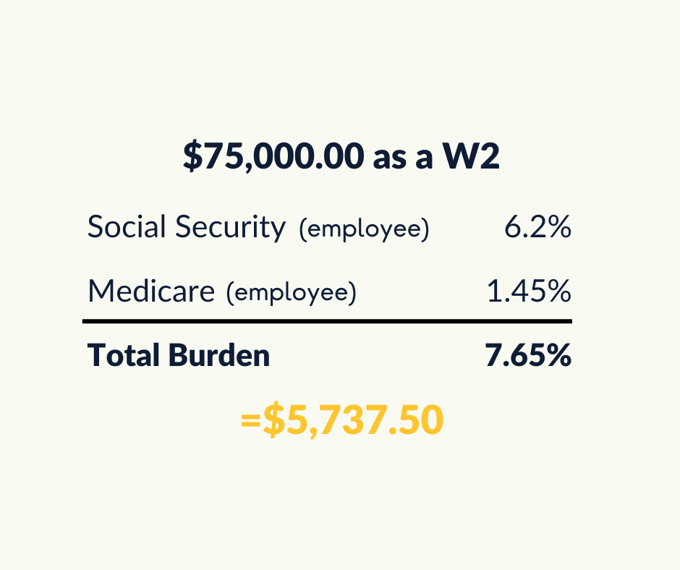 So for those of you making roughly $75,000, that means you save over $7,600 in real dollars. That doesn't include not having to generate invoices, waiting Net 30 to get paid, all while still owning your own schedule and writing off expenses.

[00:10:58] Angela Alea: These are the facts. The math is the math. Our industry is changing and it's actually becoming even better for the people working in it. You know, a decade ago, it was unheard of for a company to W2. Now more than the majority of our industry is doing that. And yet, so many professionals are hesitant to get a W2 because they don't understand what it really means for them.

[00:11:23] Angela Alea: These companies that are W2ing, there is literally nothing in it for them. It's more expensive to do it, but it allows them to be compliant and it's good for you. So I don't want that to be lost on you.

[00:11:48] Angela Alea: So to wrap this up, I encourage all of you to dig into the facts. Stop listening to the people with the wrong information, or who are saying things like, "this is just how our industry has always worked." In case you haven't been paying attention, the world is changing, not just our industry!

Those who pay attention, adapt, stay in the know about the facts–you all have a real opportunity ahead, so stop leaving money on the table. What worked before is no longer working and is no longer applicable every single date, state or federal mandates come down for businesses, and guess what yhey're about? All about how they have to take care of you, their W2'd employee. That's the way the world is moving: employee-friendly, employee-focused. So keep that in mind.

[00:12:25] Angela Alea: We always love to get your feedback and this is no doubt, a hot topic. So feel free to reach out to me with your comments, your thoughts, and your opinions directly at angela.alea@lasso.io or reach out to us at podcast@lasso.io.

[00:12:41] Angela Alea: And certainly don't forget to subscribe! Thanks so much, everyone.

Meet our host, Angela Alea, the President and Chief Revenue Officer at LASSO, as she leads our audience on a mission to set order to chaos in the...

Episode 2: What Kind of Company Do You Want To Be? Ft. Clay Sifford

Clay Sifford, CEO and Founder, shares the story behind how LASSO came to be on this week's episode hosted by Angela Alea. Listen in as they unpack...

Episode 3: Removing The "Us vs. Them" Mentality

In this week's episode join our host, Angela Alea, as she explores the Code of the West, a set of unwritten rules from cowboy culture that just might...

Get the latest in your inbox

Find industry insights, tools, and tactics for event and entertainment production companies, event staff and security, and crew members. Subscribe today to stay in the loop!